Presented here is a Hiroshi Tamura guitar from 1972.
In fact a P50 model. They carried this model number
through the seventies but as it has something to do with
its' price one should notice that this was quite an expen-
sive guitar. I didn't bought it for that reason! I liked
the sound. The brothers Tamura worked together
during the sixties, seventies and eighties. They are
no longer alive and had no successors. 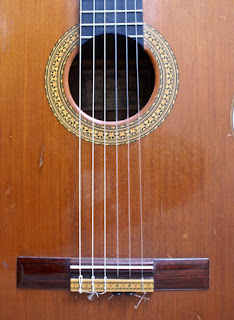 A narrow grained solid cedar top that has its' marks
of intensively playing and in fact a kind of rough
treatment. An ebony fingerboard but on the other
hand a rather simple plastic topnut. I've changed
both topnut and bridgebone into an ivory one.
Its' scale is 655 mm. Width at the topnut: 52 mm.
Quite a standard 7 fan bracing with 2 closing
ribs in the old Antonio de Torres way.

The back that is in good condition but laminated as
are the sides. The appearance is still great as it appears
to be Brasilian rosewood to my opinion though only
a top veneer layer. Inner woodwork is immaculate. 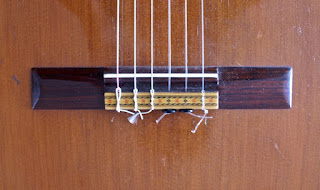 A Rosewood bridge that carries an experiment: The
G and B string have been mounted with a button that
in fact works the same as a string holder. The advantage
of this way of stringing a guitar is that the strings will
make a better (steeper)  angle over the bridgebone. 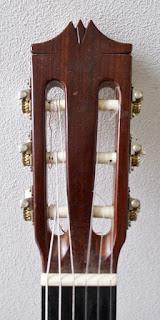 A tasteful headform but strangely enough the distance
between the tuners is a bit larger than normal. The tuners
installed now are not original and are of a poor quality.
But still I have to make a solution for this odd aberration.
I've ordered three in line tuners that can be separated
by sawing them in order to make individual tuners
again and add an extra screw to mount them. 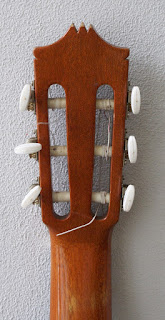 On the more expensive models an ebony line has
been mounted in the neck. Probably not neces-
sary as the neck is still straight after 45 years.
The sound is quite similar to the wellknown
Kohno concert models of that time. Deep bass
notes with a warm high end that is in a good balance.
Maybe it lacks a bit character compared to the real
top but the prices (and sound) of these instruments
were related to a near top quality guitar. 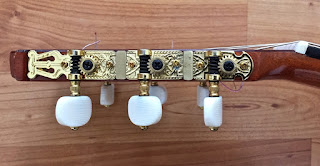 On this picture you can see how I brought up a solution
for the strange distance between the string rollers, not
the common 35 mm but 38 mm. 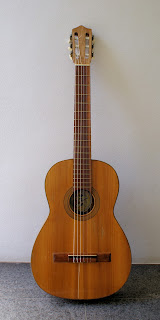 The repair under the bridge can be seen by
clicking on this picture.

Now matched up to the color of the rest
of the soundboard.

A factory made guitar from Hijos de Vicente Tatay from which
a lot of examples must have been made. The same models were
delivered to the Ramirez company in Madrid. Those guitars can
be recognized having a dark blue label. As one of the former
employees told that apart from the whole bunch of guitars from
Valencia some bags of rice were delivered as well as there
was shortage of about everything after the civil war and the
second world war. In order to make a decent instrument of it
I was forced to  redress the frets which were made out of copper
and showed file traces as was common on these student guitars.
The next move is to remove the ugly varnish on the fingerboard.
Now it looks fresh again and feels better though not entirely
original. The insert in the ladder braced soundboard is in fact
exactly in the seam of the two halves. Not even centered.
Another thing to be done was to reshape the roughly
modelled bridge as it came off allready and I wanted to lower
it in order to study the effect of it.

This picture shows us the walnut wood used for back and
sides. The crack in the lower left corner will be repaired
in the near future. No problem fixing that. As for the insert
in the soundboard: It can be brought back into the color of
the surrounding wood with a water based stain. 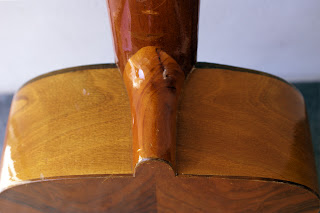 Shown here is the typical construction found in Valencia
of the neck to body. The lighter wood is the wittnes of it. 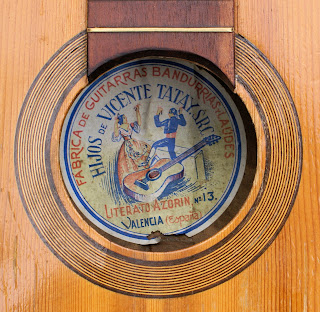 The rosette exist of simple concentric circles and some
"higher end"  models show a slightly more decorated one
but the rest of those guitars in fact show the same mediocre
materials. That these guitars sound pretty good has a lot
to do with the resin in the wood that in fact cristallizes over
time and makes the top even more vibrant.
The typical label of the fifties can be studied here. 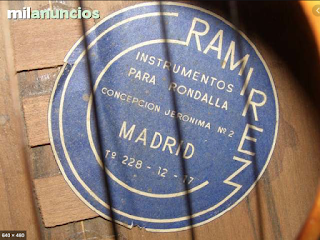 Presented here is the dark blue label used in the Jose Ramirez
branded study guitars of the fifties from the past century. In
fact Valencia imported instruments as the excerpt from the
Manuel Rodriguez book here beyond attests. 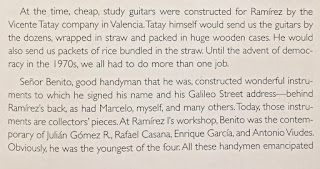 The recently added Spanish guitar with the frets removed
as the action was too high and the thickness of the fret-
board is bigger towards the head. There a part of the so-
lution can be cured. The bridge is way too heavy so that
part will be sanded down as well to normal proportions.
A little more elaborate rosette completes the 3 pieced
soundboard. Scale 650 mm. This instrument is also
is equipped with a ladder bracing.

Often these guitars are equipped with walnut sides
and back. On this example they used mahogany.
The fingerboard is made from a dense hardwood but
not really detectable. Spruce topped soundboard
in three pieces as often was the case on the cheaper
Valencian made guitars. No fan strutting, just a
simple transverse bar just below the soundhole. 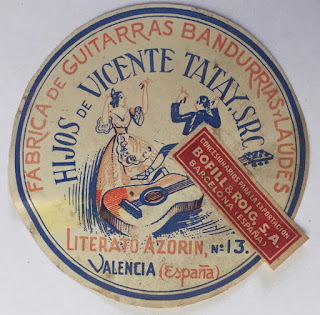 A little bit clumsy glued,  the label just came loose
but that was the opportunity to have it properly photo-
graphed. Bofill & Roig were only exporters. Of course
we are curious in how this guitar behaves alongside
the walnut example here above. 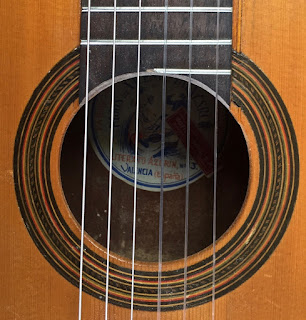 And the somewhat more elaborated rosette. After a set up
with new strings this example from Hijos de Vicente Tatay
prooved to be sounding way better than the one here
above. That one has been sold recently: You simply
can't keep every guitar you're laying your hands on!